On this page is a sequence of screen shots from a typical game at Difficulty Factor 5 (the highest). 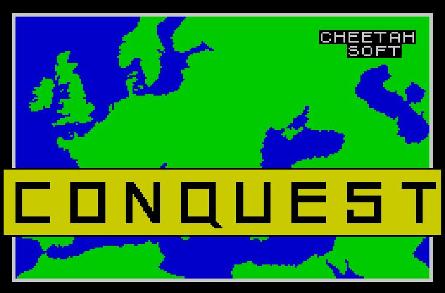 First step is to choose a start square (for the site of your capital). Here we have chosen Rome. The coordinates of some popular start squares are: 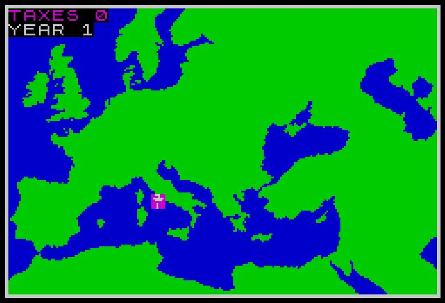 The emperor's legion is coloured purple. Use it to conquer the squares around the capital (colouring them red). Once five additional squares are taken (indicated by 'Taxes') then another legion is formed on the capital. All the other legions are commanded by one of the emperor's generals and are coloured black. 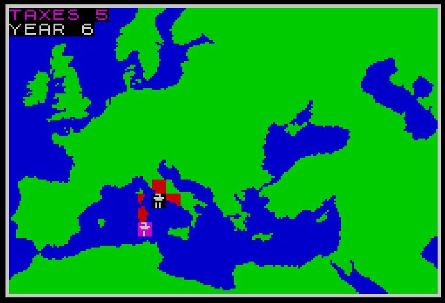 Barbarian attacks on the empire's frontiers are indicated by these little flashing skull-and-crossbones.

One nifty thing about the Spectrum emulators is that you can ratchet up the CPU speed (from the 3.54MHz of the original Spectrum) to 100MHz. A lot of the AI (Artificial Intelligence) of the game is written in BASIC, so can seem rather slow by modern standards (barbarian attacks and plagues suffer from this - the enemy empires were written in machine code, so were a lot faster). But turn the CPU speed up to (say) 50MHz and suddenly all the wait time disappears.

If only my original Spectrum had been as fast as this! 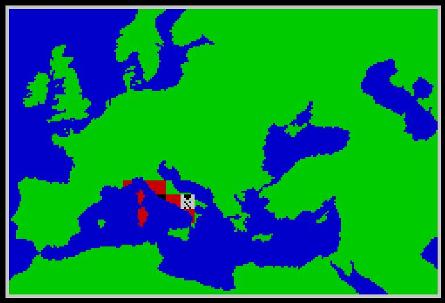 Plagues are shown by purple flashing skull-and-crossbones. They pretty much depopulate an area of approximately 10 x 10 squares, so can be devasting to an established empire. Nothing can prevent the effects of plague - you just have to sit and take it!

Fortunately, this one has broken out in the Middel East, so shouldn't reach as far as Italy. 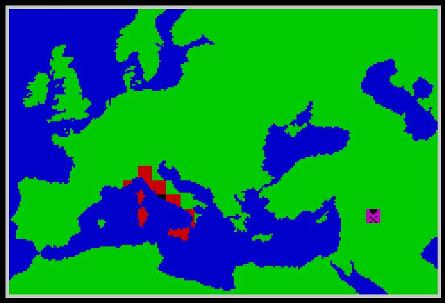 As you push back the frontiers of your empire, barbarians keep nibbling away at the edges. Any square with a legion stationed on it is safe from barbarian attack. You can also build forts which prevent barbarian attacks. Another risk for your empire is civil war. This can be triggered in a number of ways:
- The emperor is killed in battle (avoid by using him sparingly)
- The emperor is assassinated (cannot be avoided, but is quite rare)
- One of the generals reaches a combat experience of ten battles (avoid by retiring successful generals and just using them for guarding the frontiers.)

Here, a civil war has been triggered and the general of the II legion is the new emperor. All the other generals have sworn fealty except for the IV legion who is in revolt (coloured green). 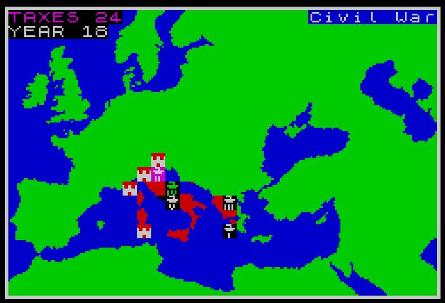 You can review the combat records of all the generals at any time. This is useful for guarding against one reaching the trigger point for a civil war (10 successful battles). It is also useful for matching the strength of loyal legions against weaker rebel ones in a civil war.
Time moves on. Another emperor has died. The new general of the I legion has assumed the purple. Things are looking quite good with a line of forts protecting the approach to Italy from the north, and a host of legions advancing into the Balkans and Romania. 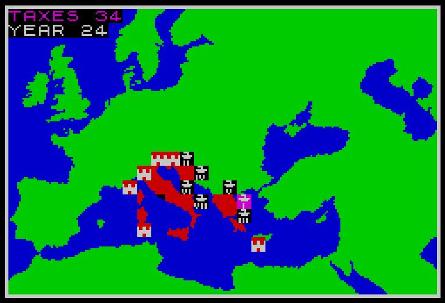 Ouch! Yet another civil war and now three legions are rebelling. This has let the barbarians make some inroads on the northern frontier. Fortunately, forts are still effective against barbarians during a civil war. To make matters worse, a rival empire (coloured pink) is rising in the north-east.

Enemy empires cannot take loyal legions or forts when there is no civil war. But during civil wars, they can take forts and the rebellious legions will let them in!

There can be up to 3 enemy empires - coloured pink, yellow and cyan. 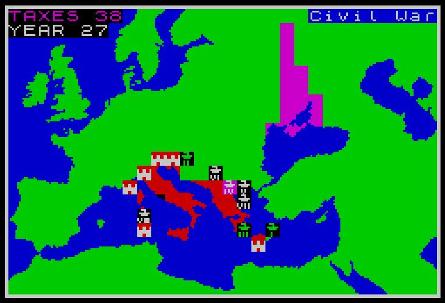 The emperor managed to squash the rebel legions, ending the civil war - and even expand the frontier towards Constantinople. But in the meantime, a plague has broken out in France, depopulating northern Italy and the border forts, allowing the barbarians to pour through towards Rome. The pink empire in the north is growing fast.

Hmmm, maybe time to quit and start a new game! 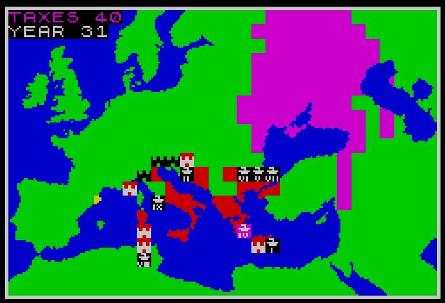